VIETNAMESE NAME
Vietnamese names generally consist of three parts: a family name, a middle name, and a given name, used in that order. Like their Chinese, Korean, and other counterparts, this is in accordance to the East Asian system of personal names. In a deviation from the East Asian naming system, a person will be referred to either by the whole name or by a given name in normal usage.
Due to the ubiquity of the major family names such as Tran and Nguyen, a person is often referred to by their middle name along with their given name in Vietnamese media and youth culture.
The Vietnamese language is tonal, and so are Vietnamese names. Copy at www.vietnambiketours.com, The same spelling with different tones are different names, which can confuse non-Vietnamese people when the diacritics are dropped when used outside of Vietnam.
Family name
The family name, positioned first, is passed on by the father to his children (patronymic naming system). It is estimated that there are around one hundred family names in common use, although some are far more common than others. The name Nguyễn is estimated to be used by almost 40% of the Vietnamese population.
Virtually all family names are Chinese in origin, although a few (particularly in the south) have been traced to Cham origins, but presumably have been Vietnamized. Copy at www.vietnambiketours.com, The surname Nguyễn is rare among Chinese family names, appearing as (Mandarin) Ruan or (Cantonese) Yuen, mostly in Guangdong province, possibly among those with partial or distant Vietnamese ethnic ancestry (also termed Gin ethnicity).
The most popular family names among the Vietnamese are (the Chinese characters following each name are their Chinese equivalents):
1.Nguyễn 阮 (38.4%)
2.Trần 陳 (11%)
3.Lê 黎 (9.5%)
4.Phạm 范 (7.1%)
5.Huỳnh/Hoàng 黃 (5.1%)
6.Phan 潘 (4.5%)
7.Vũ/Võ 武 (3.9%)
8.Đặng 鄧(2.1%)
9.Bùi 裴 (2%)
10.Đỗ 杜 (1.4%)
11.Hồ 胡 (1.3%)
12.Ngô 吳 (1.3%)
13.Dương 楊 (1%)
14.Lý 李 (0.5%)
The following include some other less common surnames, in no particular order:
1.Lâm 林
2.Đinh: 丁
3.Nghiêm: 嚴
4.Đào: 陶
5.Vương: 王
6.Trịnh: 鄭 (almost exclusively a northern surname, based around Thanh Hoa)
7.Phùng: 馮
8.Chung: 鍾
9.Triệu: 趙
10.Đoàn: 段
11.Trương: 張
12.Tôn: 孫
13.Liễu (in northern or central regions): 柳
14.Lưu (in central or southern regions): 劉
15.Mai: 梅
16.La: 羅
17.Văn: 文
18.Tạ: 謝
19.Lương: 梁
20.Kim
21.Thạch
22.Lạc
In Vietnamese cultural practice, women almost always keep their family names once they marry, just as in other East Asian cultures, including Chinese culture, to the north and northeast.
Some Vietnamese have a dual family name. Usually it is a combination of the father's family name and the mother's family name. For example, "Nguyễn Phạm", "Nguyễn Lê".
Intercalary name
The middle name is selected by parents from a fairly narrow range. In the past, almost all women had Thị as their middle name, and many men had Văn. More recently, a broader range of names have been used, and people named Thị sometimes omit their middle name.
Thị is by far the most common female middle name. Male middle names include Văn, Hữu, Đức, Công, Quang and many others.
Generally, the middle name has three usages:
To indicate a person's generation — brothers and sisters share the same middle name, which distinguish them from the generation before and after them (see generation name).
To separate branches of a big family. For example, "Nguyễn Hữu", "Nguyễn Sinh, "Trần Lâm". However, this usage is still controversial. Copy at www.vietnambiketours.com, Some people consider they are dual family names, not family name + middle name. Some families may, however, set up arbitrary rules about giving a different middle name to each generation.
To indicate a person's position in the family, also known as birth order. This usage is less common than others. It seems that just the Chinese still keep this convention.
Given name
The given name is the primary form of address for Vietnamese. It is chosen by parents, and usually has a literal meaning in the Vietnamese language. Names often represent beauty, such as bird or flower names, or attributes and characteristics that the parents want in their child, such as modesty. Typical given names consists of two parts, the first is tên lót, which is just there to make it sound prettier, fancier, while the second is the one that most people go by.
Typically, Vietnamese will be addressed with their given name, even in formal situations, although an honorific equivalent to "Mr.", "Mrs.", etc. will be added when necessary. This contrasts with the situation in many other cultures, where the family name is used in formal situations. This practice is similar to Icelandic practice.
Addressing someone by his or her family name is rare, though not impossible to find. In the past, married women in the north have been called by their family name, with Thị 氏 as a suffix. In recent years, doctors are more likely to be addressed by their family name than any other group of society, though this form of reference is more common in the north than in the south.Copy at www.vietnambiketours.com,  Some extremely well-known people are sometimes referred by their family names, such as Hồ Chí Minh ("Uncle Hồ") (however his real last name is Nguyễn), Trịnh Công Sơn ("Trịnh music"), and Hồ Xuân Hương ("the poetess with the family name Hồ"). In the old days, people in North Vietnam called parents using the first child's name.
However, when being addressed within the family, the children are commonly referred to by their birth number, starting from one in the north but starting with two in the south.
Example
Nguyễn Tấn Dũng is the current Prime Minister of Vietnam. Nguyễn is his family name, Tấn is his middle name, and Dũng is his given name. In formal usage, he is referred to by his given name ("Mr. Dũng"), not by his family name ("Mr. Nguyễn").
Likewise, the famous general and military leader, Võ Nguyên Giáp, is referred to by his given name, eg, "General Giáp."
1 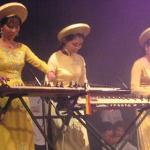 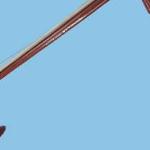 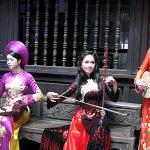 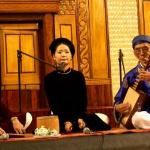