BIKING full day DALAT
Highlight: During the 1890s, explorers in the area (including the noted bacteriologist Alexandre Yersin , protégé of the renowned French chemist Louis Pasteur), which was then part of the French territory of Cochinchina, asked the French governor-general Paul Doumer to create a resort center in the highlands. The governor agreed. The original intended site for the hill station was Dankia but Étienne Tardif, a member of the road-building expedition of 1898-99 proposed the current site instead. In 1907, the first hotel was built. Urban planning was carried out by Ernest Hébrard.
The French endowed the city with villas and boulevards, and its Swiss charms remain today. Hébrard included the requisite health complex, golf course, parks, schools and homes but no industry. The legacy of boarding schools where children from the whole of Indochina were taught by French priests, nuns and expatriates lasted until the end of French rule. There were seminaries of Jesuits (such as Pius X Pontifical College) and other orders. The elite Vietnamese National Military Academy graduated its first class of future leaders in 1950. There was also an aviator school at Cam Ly Airport.
Architecture in Đà Lạt based on the period of French colonization. There is built in 1938 Dominant de Marie Church and Convent, which offers a panoramic view of the city. The Convent is a home to Roman Catholic nuns of the Mission of Charity.
Da Lat's specific sights are pine wood (forming the name: "City of thousands of pine tree") with roads twists and turns and tree marigold (Vietnamese: dã quỳ) blossom in the winter. This city has a unique temperate weather in such a tropical country like Vietnam. Mist cover valleys almost the year leads to its name "City of eternal spring".
Da Lat is also known as an area for science research in the fields of biotechnology and nuclear physics.
With its cool climate the whole year over, Da Lat is the area that supplies temperate agriculture products for all over Vietnam, for example, cabbage and cauliflower. Its flower industry produces two typical flowers which are hydrangea (Vietnamese: cẩm tú cầu) and golden everlasting (Vietnamese: hoa bất tử). Confectionary industry also offer a wide range of mứt- a kind of fruit preserves made from strawberry, mulberry, sweet potato, rose.
Brief Itinerary: 50km cycling (L)
This ride offers the best sampling of single-track downhill riding in the Da Lat area. On this excursion, you’ll visit numerous attractions in Da Lat City including the Crazy House, King Bao Dai's Summer Palace, Lam Ty Ni Pagoda, the Valley of Love, Da Lat Flower Garden, Langbiang Mountain, and the Railway Station. Then, Vietnam Bike Tours’ll cycle around Xuan Huong Lake. You’ll take in some outstanding views as you cycle along Da Lat’s pine-forested hills and picturesque flower farms.
Inclusive of:
Exclusive of:
Departure Dates: Daily
Group Size: Minimum of two and maximum of ten cyclists
Price: Rates vary. Please contact us to get the best possible price based upon your travel period and specific touring needs*
Home > Vietnam > Starting in Dalat > Biking full day Dalat
1 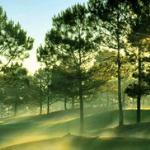 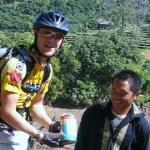 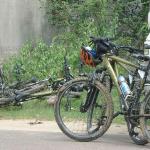 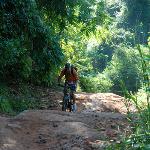